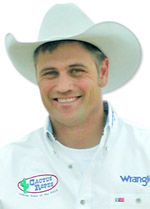 We’re in Vegas for the National Finals and it’s a very different year for me. Because of this article, National Roper’s Supply asked me to give a daily motivational talk each morning at their trade show at the MGM. I agreed and then realized what a huge undertaking I had signed up for. Now, I’m used to speaking and can do a reasonable job when talking to my students or when making brief comments to a crowd.

Dismount during a Calf-roping Run

This month we are talking about the dismount during a calf-roping run. Though I didn’t start roping competitively until I was sixteen, I grew up riding and roping on our ranch. Everyone in the family was involved when it came to working cattle: my brother and sisters, my dad, granddad and me.

Now and then I was allowed to ride one of the good horses and when I was about ten or twelve I came up with a game of sorts to entertain myself. I would be in a big pasture, where I wouldn’t get caught, get my horse into a good lope, and then get off on the right side while he was running. Soon, this wasn’t quite exciting enough. One horse I rode would jump small mesquite bushes. So we would be loping along pretty fast and while he was in mid-air, jumping the bush, I would get off and run beside him. He would stop and I would get back on and do it again. I had no idea what I was doing. I was just a kid having fun.

Last month we talked about horse position when roping. This month I want to touch on something that is mostly overlooked in our sport and that’s athletic position. Athletic position is having your weight distributed over the balls of your feet, knees slightly bent, back straight and head up. In any athletic sport where you have to move fast, this is the position you start from. College and professional athletes all know this.

It's All About Position

There are very few places or times where "position" is not a major factor. This is true on many levels, in everything from your position in life, your spiritual position, and in roping calves.

Today we’re talking about roping position. I’ll always take a guy that may not be as fast or have as much ability with good position over a guy that’s blistering fast with bad position. Most of the mistakes made when roping are due to being out of position.

Read more: It's All About Position Add new comment