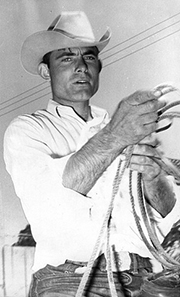 PATTERSON, CA – Julius Boschi, 90 of Patterson passed away April 25 at his residence.

Mr. Boschi was born in Patterson and was a lifelong resident. He was a dairyman and rancher for many years. He was a parishioner of Sacred Heart Catholic Church in Patterson. Julius was a member of the Professional Rodeo Cowboys Association and in 1962 he was National Champion in Team Roping. He was a Patterson High Class of 1947 graduate and a champion athlete in football and baseball in high school. He was an avid sports fan.
Mr. Boschi is survived by his wife, Jeri Boschi of Patterson; sons, John (Judy) Boschi of Turlock and Jim (Beatrice) Boschi of Patterson; stepson, Don Thomas of Cheyenne, Wyoming; daughters, Sandi Boschi of Patterson and Sharon (Joe) Chipponeri of Dillon, Montana; step-daughter, Suzy (Butch) Quillen of Gardner­ville, Nevada; sister, Rose Silva of Patterson; 10 grandchildren and 10 great-grandchildren. He was preceded in death by his wife, Helen Boschi; son, Phillip Boschi; daughter, Linda Boschi; brother, John Boschi; sisters, Alma Rightsell and Annie Barcelos.
A memorial mass was held May 3 at Sacred Heart Catholic Church in Patterson. Services were conducted by Hillview Funeral Chapel, Patterson.